Data from China today largely beat expectations, which itself feels like a novelty given the pattern of data misses of late. But then perhaps that is because economists have become too accustomed to the negatives, and therefore lowballing their own forecasts. And whilst it’s nice to see data to surprise to the upside, it is unlikely to have a material impact on markets given sentiment seems to be fixated upon the Fed, rates and the potential for a global recession (which we are arguably already within).

The yuan could have further to fall

USD/CNH reached the big 0.7000 level – which was a potential scenario we first floated back in August the 16th. The pair is currently within its seventh consecutive month higher and supported by the divergent policies of the Fed and PBOC. The 2-year spread between US and China’s bond yields are soaring higher and USD/CNH prices are gladly following. With increased speculation that the Fed would not only raise rates by 100bp next week, but also raise them to 5% by March 2023, that comes as no surprise.

And this is despite the PBOC’s attempt to stabilise their currency with cuts to their RRR (reserve requirement ratio) and withdrawing ¥200 billion. Still, were these measures not taken the USD/CNH likely be trading higher, and I’d argue that Beijing likely want a weaker currency anyway to boost growth via exports – much like the BOJ. 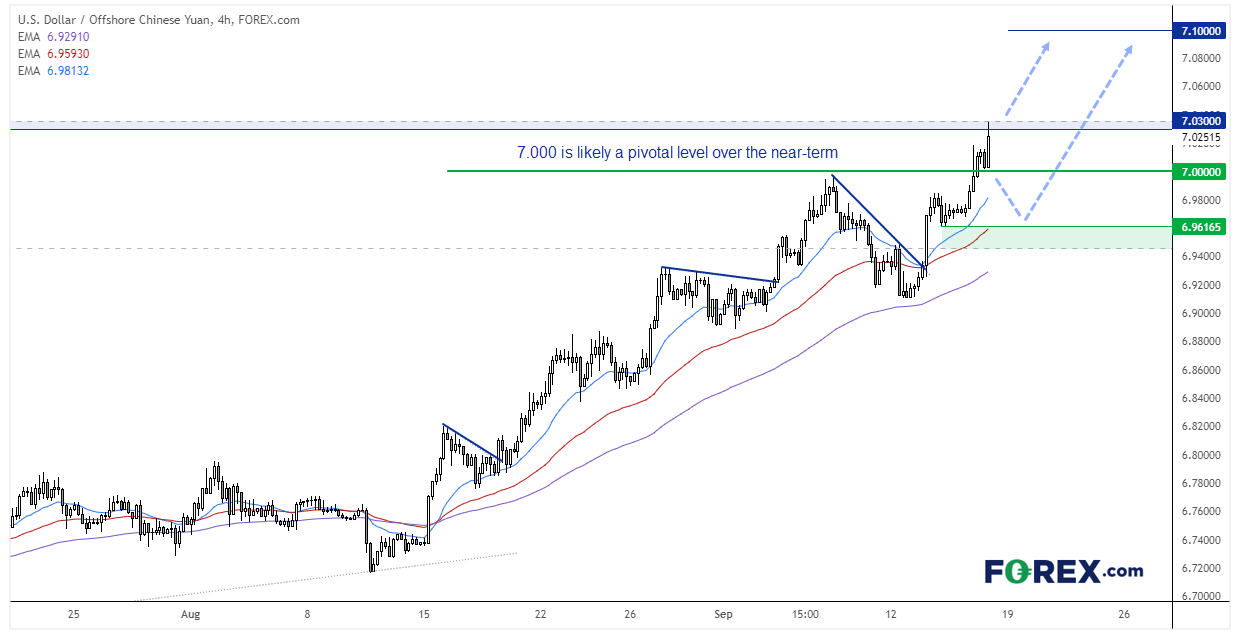 The 4-houtr chart remains in a very strong uptrend, and after a daily close above 7.000 yesterday it has now respected that key level as support today. Resistance has been met at 0.7030 (a 76.8% Fibonacci projection from a longer-term bullish triangle), so we’re now waiting to see if it can hold above 7.000 – which is likely a pivotal level over the near-term.

Should break back below 7.000 then bulls could seek bullish setups above the 6.9615 low, whereas a break above 7.0400 assumes bullish continuation and brings 7.1000 into focus.