Welcome to Technical Tuesday, a weekly report where we highlight some of the most interesting markets that will hopefully appease technical analysts and traders alike.

In this week’s edition, we are getting technical on Gold, EUR/USD and Nasdaq. So, there’s something for everyone.

Obviously, we would like to highlight technical reasons in this report but make no mistake about it – today’s big moves have occurred because of fundamental reasons. Today’s much hotter-than-expected US inflation has wiped out days of gains for stocks, while the dollar has rallied sharply which in turn has weighed on gold.

Gold fell to below $1700 again in the aftermath of the hot US inflation report, before bouncing off its lows. But the breakdown below some key short-term levels has now tipped the balance back in the bears’ favour and a drop to a new low on the year looks increasingly likely.

Today’s CPI data reinforced expectations that the Fed is going to raise rates by another 75 basis points next week and proceed with further aggressive hikes until inflation comes back under control.

The reversal in gold prices means the metal is currently displaying a large bearish candle on the daily chart, after it turned lower from key resistance around $1725. Given the dollar rally, bond market sell-off and now this bearish-looking technical setup, the precious metal could well break further lower from here. It looks like the bears might be targeting the presumably big pool of liquidity resting below $1676, last year’s low. Undoubtedly, that’s precisely where many trapped long traders’ stop loss orders would be resting. 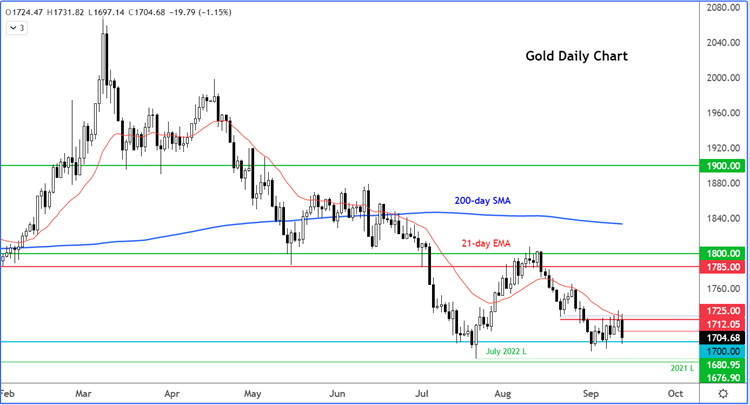 The Nasdaq has slumped more than 4.5% so far in the day in response to the hot inflation data and market pricing of even more Fed tightening. The tech-heavy index turned lower from right where it should have anyway, given that it has been stuck in a bear trend all year long. It slumped from 12800 resistance level (previous support) and it hasn’t looked back since. At the time of writing, the index was re-testing its 2021 low at around 12210, but given the sheer size of the drop, dip-buyers were nowhere to be seen.

If the index goes on to break the most recent low at 11918 either before the end of today’s session or later in the week, then this will give the bears renewed confidence to press ahead aggressively, as last week’s attempt to form a bottom will have failed. In that case, a possible returned to the low hit in June at 11035 cannot be ruled out. Today’s close will be key.

On the other hand, if dip buyers step in and drive the market higher, then the key level to watch on the upside will be Monday’s low at 12570, which could turn into resistance and lead to renewed weakness. But given how the market is behaving today, I would be very surprised if the dip buyers show up.

EUR/USD back at parity

Today’s dollar rally means the EUR/USD’s breakout attempt has proved to be futile yet again. The EUR/USD has turned sharply lower after it reached the 1.02 handle the day before. With support at 1.0090 failing to hold, and the bearish trend line being confirmed again, watch out below.

At the time of writing the EUR/USD was testing parity again. A clean break below this level would pave the way for a potential drop to the recent low made at 09864. Stops below that level look to be in trouble, judging by how the EUR/USD is shaping up today. 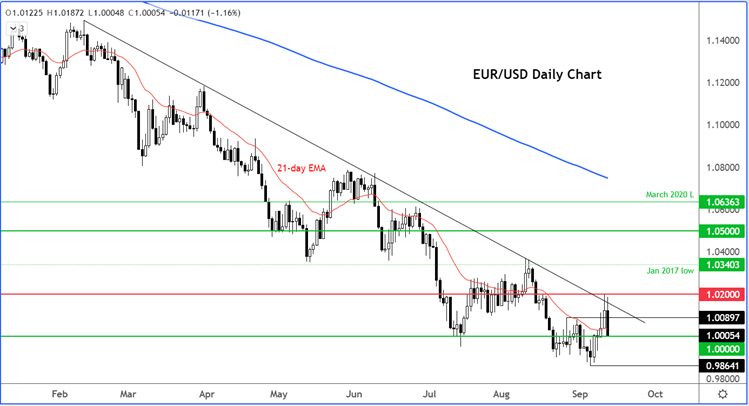